Have any one tried consuming function from BPM using C# Code not with the help of Invoke.

If you have done please share me the Sample

Ok Sure will try and let you know.

Is this what you ended up doing @Dhanalakshmi

Answered my own question, reason I wasn’t seeing this was because I was in an in-trans data directive… 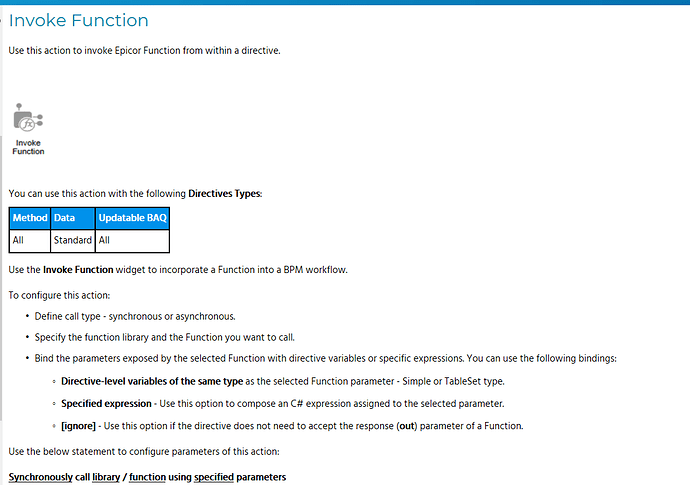 Not sure why In-trans directives are excluded, but I was able to make it work in in-trans using C# code. Created a simple function that accepts String input, and outputs a String also. I found the code by building a DD Standard, then exploring what the generated C# code looked like. Once you save an enabled BPM, it builds the code to the following folder:

Once I had the generated code, I was able to use it within a C# code block in-trans.

My thoughts as to why Epicor are not showing the widget in in-trans could be because of the confusion over which row the call should be made against, the unchanged or changed? Somebody else more knowledgeable will hopefully jump in!

Mark, I have a function with these input params:

Would my function call be this then?

I get an error like this when I do that:

It’s been a long while since I looked at this.

Your current error could be this line:

InvalidCast is probably because you’re trying to convert a decimal, to a decimal.

Thanks Mark, it was actually the Tuple.Create… I didn’t need that and my function wasn’t expecting a Tuple.

Based on these examples, I am not sure by what you mean ‘My function wasn’t expecting a Tuple’ ?
Did your function require 3 input parameters?

Instead I was passing a tuple.

Hey Taylor
Try something like this this.InvokeFunction(“UpdatePO”,“UpdateApprovedPO”,Tuple.Create(PO, POLine, newdocunitprice)); and let me know if it works.