Background:
In Sales Order Entry, I created a commission adjustment calculator to track the correct commission value we pay our reps, in Epicor. I created a Sales Order Update Pre-Processing Method Directive to do the logic of the calculation. This is all done with the widgets, as I have no real experience using C#. For the most part, I am happy with how it all works, there is just one condition that I am having trouble getting the BPM to trigger on. That being when the Base Commission value changes, re-calculate the Adjusted Commission. 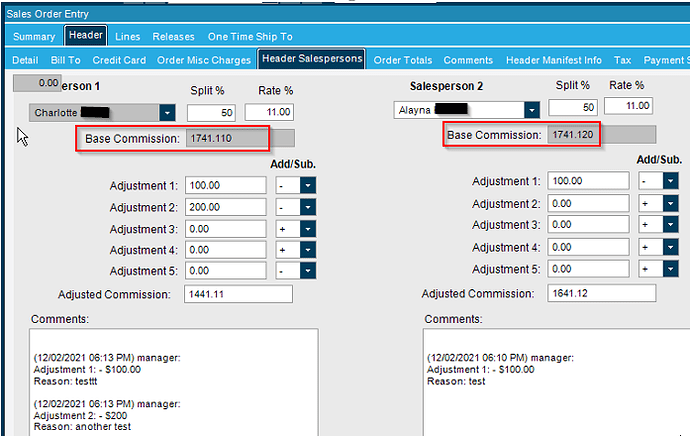 Issue:
Since the Base Commission value, OrderHed.SRCommAmt1, is calculated by Epicor, that value is not updated until after the Pre-Proc Method Directive runs, so the BPM never sees that that value has changed.

I’ve messed around with quite a few different ideas over the past few weeks, mainly trying to invoke the SalesOrder.Update Method from various directives, but keep hitting dead ends. At this point, I am finding a bunch of ways how NOT to solve the issue, but could use some fresh input and or ideas.

Below is the latest idea I am trying to run with. I am not sure if I am missing something with its setup, or if it just won’t work as I imagine. I could really use some input or advice on that idea. Also, if anyone has any suggestions on another route to try out, that would be appreciated as well.

Latest Idea:
As of writing this, the most promising idea I am running with is an In-Transaction Data Directive on Erp.OrderHed.Update that detects the base comm value has changed, shows a message that a change has been detected, and then Enables a Standard Data Directive. I also set up a Boolean UD field, that when set to true, would be a conditional trigger for the Pre-Proc Method Directive. The Standard Data Directive, in theory, should set that Boolean field to true, and then invoke the SalesOrder.Update Method, causing my initial Pre-Proc Method Directive to run again.

I have the In-Trans DD working, as it shows the message that it detects a change. The Standard Data Directive is where I am running into issues.

Mainly, I am following this post: E10 BPM to invoke a BO Method to Update a different Table and I have played around with quite a few different combinations of Rob and Stephens examples, but I mainly keep running into this error:

I think this means my Standard DD, does not know what row it is working with/trying to update?
To get around this, I thought maybe I could use BPM data fields to store the Company, OrderNum and SysRowID values from the In-Trans DD and then set them to variables in the Standard Data Directive. This worked to pass over the company and OrderNum values, but I am not too sure I have things set up correctly to pull in that info.

I guess at this point, I need to find out if this Standard DD idea is even possible.