We are trying to upgrade to 10.2.500.23, During testing, I noticed something new in Job Entry. We normally have a main part with PartNum: 2S03-2 for example. This part has a few things bolting to it in sub-assembly. After everything is bolted to it, it remains the same part (2S03-2). See image attached.

The ‘error’ I am receiving now when trying to Engineer the job is ‘Circular Reference of Part 2S03-2 from Assembly 4 to Assembly 5 is not allowed in the Engineered Job.’ I noticed in the details of the ‘error’ there is a new method ‘CheckCircularReference’.

Is there a way to turn this off? We do this all of the time. 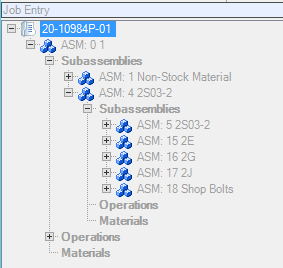 Russian Nesting Dolls? j/k I would think that a part in itself is not really possible, and really does not make sense. You might rethink the logic there as realistically it would become something new once you bolt something on or perform an operation to it. Just a thought.

It’s an accounting and inventory thing. If you issue something it has a cost. If you do something to it, the cost goes up. Now which cost is it? If it’s the same part number what’s the cost of that part number? If you add up your inventory how much is the value of the inventory? Is it pre added stuff or post?

It shouldn’t have been allowed before.

We do this all of the time

It shouldn’t have been allowed before.

Just curious, what kind of product you manufacture?

I’m thinking I’ve run into the most issues like this with methods for capital equipment.
Where sometimes you might be able to rework the methods and flatten/remove unnecessary part numbers… if you have the time.

Steel structures. No stock part numbers. Everything is on the fly. The main part name being manufactured is the final part name being assembled in the field and needs to match the erection drawings. It is also the main part name on the BOM being manufactured in the plant even though you might have to bolt a cover plate or something on it before shipping. Pretty standard stuff in electrical substation/transmission steel market.

I run into this mostly with rework RMAs. Customers return something, we say we’ll fix it and send it back… thus the returned part becomes a material on a job to create… the returned part number. Depending on how picky the customer is about paperwork, this can be anywhere from a piece of cake to a nightmare.

I haven’t had one in a while, but I don’t remember Epicor ever giving me a circular logic problem.