I’m working with Kenteic and wondering if anyone has see the Customization compiler displays the wrong line number. To give you an example, I opened the base code of any form and type a bad code then compile (F5). The error should indicate line 53 instead of 112.

If you click All Code you will see all the hiden code that is there which gets you to the right number.

That didn’t give the correct line either. On other codes I have written, clicking All Code changes the error line number but still does not match. In the simple example above, checking the box does nothing and does not change the lines since it’s a brand new customization code.

When I export the customization and open it with Notepad I can dee that the code is double spaced. Could this be the issue? I’m wondering if this is a Kinetic issue or some OS, VS or server setting. I haven’t seen this with E10.

@fkatsumi I am in 21.2.4 and in a converted from E10 and new customization I get the correct line 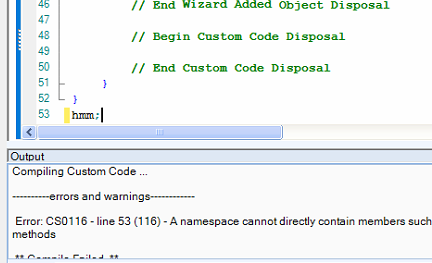 This may also be related to an issue that I reported that has been confirmed by support. The code editors seen throughout Epicor aren’t the same. If you pay close attention, you notice that some support a higher compiler versions than others. This is particularly noticeable if you try to use interpolated strings. And each one has its own bugs and quirks. The suggestions for methods you can call and objects you can interact with all seem to be hand-coded, because there are a number of omissions and false inclusions.

I reported that the code editors for configurator events were mangling my code by inserting newlines after every line. I don’t understand the rationale for this, but the intended behavior is that it double-spaces your code on save, and then removes the extra newlines on load. The bug is that it sometimes doesn’t remove them on load, so then when you save again it ends up quadruple-spaced or more.

Thanks Kevin for the info. I upgraded to 2021.2.5 and confirmed this issue had been resolved. This is from the release notes: