Does anyone know what the f means and is this okay for a Live environment?

I don’t know what the f means, but we have dozens of customizations with and without the f in our Production environment. It doesn’t seem to hurt anything.

I don’t know what the f means

LOL, hadn’t looked at it that way

Does anyone know what the f means and is this okay for a Live environment?

Roberto, I’m pretty sure it’s appended when you do a force-verify. That basically sets the verify to ‘pass’ without checking everything. We’ve had to do that on some customizations to run them. It’s fine.

Force Validation of Customizations or Personalizations

From the Actions menu, select a Force Validation command:
Force Validation - Force validate the selected customization/personalization with uplift (version 9 to version 10) and check for memory leaks.If memory leaks are found, and the item compiles, a confirmation window displays.

Force Validation (No Check) - For the selected customization/personalization, force the Status field to Pass and the Valid For field to the current version. There is no version uplift and no check for memory leaks.

@askulte - I did not select Force Validation - I selected only Verify Customization.

I do verifies all the time, never force verify. I know for certain that some of the customizations that have an f on them have been verified without having force verify done. Our QuoteEntry screen has an f on it and we’ve done a LOT of work on it, with a lot of verifies being run through out the years and many versions of it. There must be something else in addition to that. Perhaps deprecated feature warnings? I know we have a few of those in some of our screens. We started with 10.1.400 I think, so a number of things have changed (now on 10.2.700) Sometimes those warnings aren’t so simple for us to fix

My guess is it stands for “Framework”.
When you get the number like 3.2.XXX.X, it’s referring to the Ice Framework version. 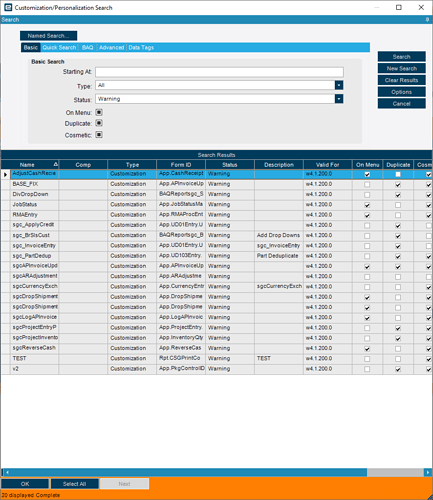 I lied. It happened that way on one screen, but it’s not consistent across others…

Curiosity aside, I won’t worry about it as far as functionality goes. If it passes, you’re good regardless of the “f”.

Seems that this status finds all the f’s. but I don’t know how to make it not f, since Verify Customization doesn’t changed it. 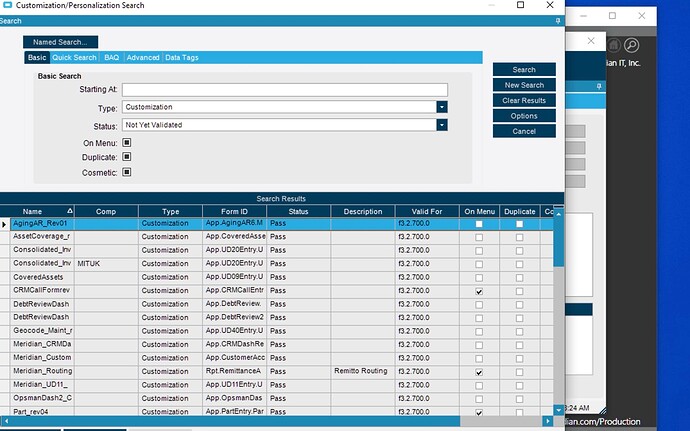 Doing a “Force Validate All (No Check)” removed all of the “f’s” based on the search results you provided.

I did a Force Validate (without the No Check because I wanted to check them) on all of the f screens, it did remove the f. There were 2 screens which complained about possible memory leaks and have a blizzard of warnings when I say not to automatically fix them. Both of them are specific to a given company though, so I’m not sure what to think of them. They both run correctly. They just now have a w instead of an f. Some of the warnings don’t seem to make any sense, others do. (we often get warnings about field overlap, but it’s usually intentional because we don’t want to display some fields the way Epicor wants to)