Thought I’d check in here first before creating an Epicor ticket to see if anyone has had this issue in the past. It’s not very urgent because the issue that caused me to need to use this tool don’t happen very often, and I am not the only one who can fix it. My user seems to have broken as far as locking and unlocking ECO Groups. Other users can interact with the group fine. Using a client on a different machine does not fix the issue.

Discovery: An absent person had an ECO Group locked. We have an “unjammer” query I was unaware of, so I did it the old fashioned way, reset password of user, went in and checked it in the part, closed the workbench, and notified user they will need to come to me for a password reset on Monday. I then went on my user to test that it was in fact unlocked, and I was able to open it up fine. After closing it, it would not release it from being locked by me. I tried all sorts of actions to get it to resolve, including checking an entire part out and back in to see if it needed something to tie to it. I don’t need to use this screen often, as things tend to work pretty smoothly for the users.

I was then informed about our unjammer tool, which uses EngWorkBench.UpdateExt as the update processing method in query designer. Using this tool in either the deployed dashboard or the query designer freezes the entire client and no changes occur. It is supposed to simply uncheck the locked, switch the lockedby (which I think mimics the behavior of checking it out, from the user updating the record as they would by opening it), then it allows us to go into Engineering Workbench with the group switched over to us and unlock it properly by closing the workbench as normal. I should note there are no applicable BPMs on the Update method, and no bpms at all on specifically the UpdateExt method.

This process is freezing on my user alone. I have full rights and groups on my account, and another user was able to use this tool without problem.

Having an eco group get stuck on my name only occurred the once, on that group in question. I have been able to lock to other groups and unlock again upon close.

Our tool for unjamming however, is not allowing me to take over any groups and freezing. It also will not let me unlock any groups.

Have you tried unlocking it with DMT?

Perhaps you have one of these issues going on:

In our environment it got to a point that I was tired of fixing these so I put a button on the EWB and when they hit this error I have code that fixes the issues and they are able to check in the part. Scott

Recently we were experiencing extreme slowness when it came to DMT loads (specifically Bill of Materials). I submitted a ticket with Epicor and the resolution was to run a SQL Cleanup script which looked at all Erp.ECORev records where CheckedOut = 0, then would join to all ECO* tables and delete the related records (ECOMtl, ECOOpr, ECOOpDtl, etc.). After running this cleanup script we noticed incredible speed increases (50k records went from a couple days to 2-3 hours) I would have assumed t…

Thanks for the response.

Good idea about trying DMT although it would be inconvenient if I always had to use it, however it surprisingly also sits running but never completes or errors on the record. 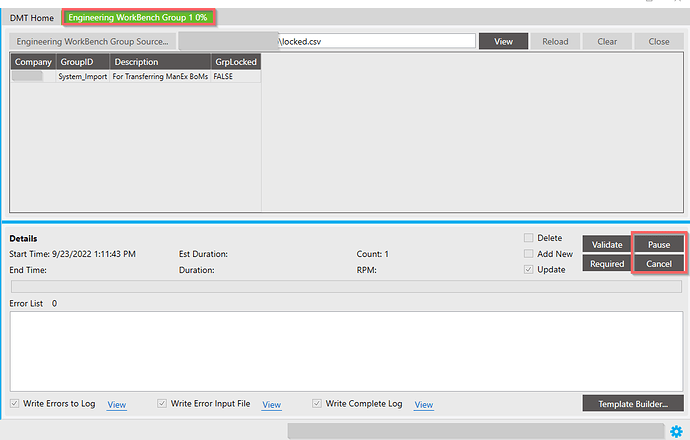 It’s not related to the Guid error, that one we know well here (markb_wi is from the same business unit). We have developed a few screens for removing bad records from specific groups’ eco tables, but this seems to occur with any group I attempt to unlock.

Likewise, I do not believe the table cleanup would help this because of a few factors;

I could try cleaning the tables relating to the current record I’m trying to unlock, maybe the EngineeringWorkbench BO is getting hung up on something from a different table. Just don’t know why it would seem indifferent to what record I was trying to change.

Hold up, I take that back. DMT did finally complete with an error after 9 minutes 55 seconds.

This gives me something to research on.