I imported a forecast and want to review what I loaded. I cannot seem to search for items in my forecast. The only way I can see what’s there is to enter the part number.

Either I’m stupid, or Epicor is stupid. I prefer the latter. Is there a way to see all three parts that I have entered into the forecast? 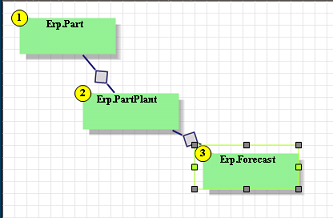 Thanks. Yep I figured it out as well. Crazy that Epicor does not have it elsewhere. I’m an expert at BAQs, but too bad for people who are not.

I suppose many people use 3rd party apps such as Sales Force for forecasting, so it’s nice that you can import into Epicor.

I thought entering a sales order was the trigger to relieve the forecast, but it did not. So I shipped and invoiced the item and the forecast shows zero consumed.

The following explanation is from an old answerbook (I think it still applies). Or if you have access to EpicCare might want to check for newer documentation there.

My days before/after are zero. Could that be the reason? I ran MRP and still no consumed quantities. I’m going to set these to 15 days each, run MRP and see what happens. Thanks again.