Do most folks just use the lot number supplied by the supplier as their lot number? Or do you combinine it with something of your own?

For example, say we buy custom PCBs and the board house provides their lot number on the CofC supplied with the shipment. But its not uncommon for the board house to make qty’s for multiple of our releases.

If we use just their lot number, there’s no way to tell which receipt they were from (the first or second month).

We generate a new lot for everything coming (that we lot track) in so from a user perspective the format and familiarity is the same no matter the vendor.

The main need for this lot tracking is for ATEX (equipment for Explosive Atmospheres). If one of our suppliers informed us that their Lot XYZ was determined to be not to spec, we would need to be able to determine what jobs - and really the Finished Goods S/N’s - that parts from that lot ended up in.

How do you cross reference the supplier’s lot number with your own internally generated one?

Lot tracker. If you needed something fancier it would be easy enough to code or dashboard. 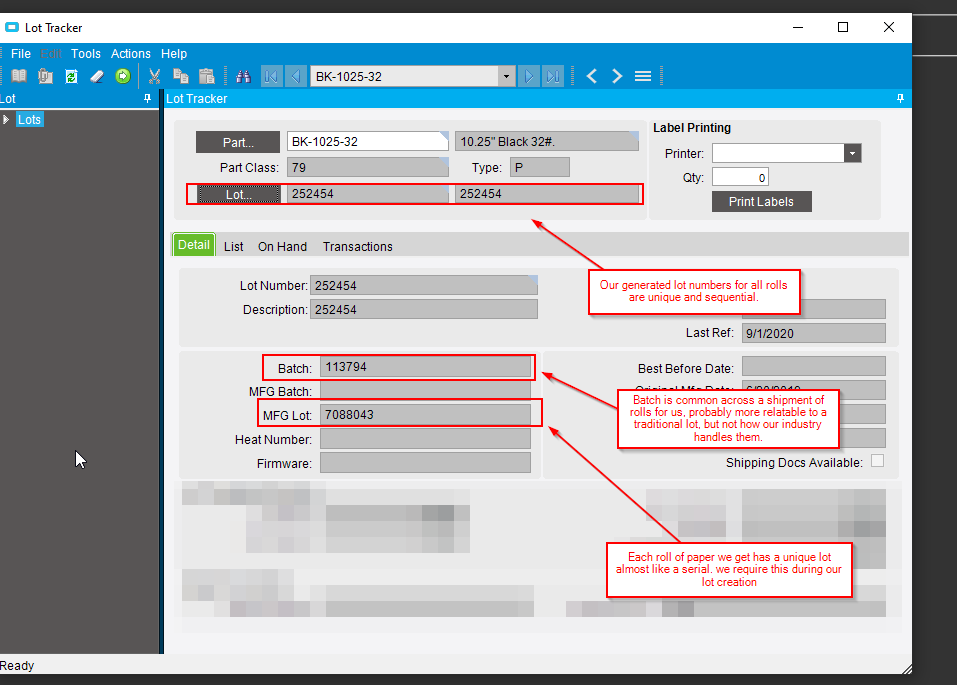 Okay, then a BAQ report to show all the S/N’s that a specific Part/Lot ended up in wouldn’t be too hard.

FTR - we don’t currently do any S/N or Lot control in E10. I’ve only lightly experimented with it.

We don’t use S/N but my understanding is it can create some administration nightmares but someone else would have to comment on that. The only headache we gained from Lots is you can’t backflush them, but honestly in the end that’s probably for the best IMHO lol!

We use their lot number because it matches what is on the manufacturer’s C of C.

This was our plan

The only headache we gained from Lots is you can’t backflush them,

You CAN do a Kan Ban receipt (which back flushes an entire assembly in one fell swoop) with lot control. Something new I learned when I got here.

You CAN do a Kan Ban receipt (which back flushes an entire assembly in one fell swoop) with lot control. Something new I learned when I got here.

Yes, we use this daily

@ckrusen Have you looked at PCID? I haven’t looked at it but I’m told that it will serialize cartons coming in so you could see this was carton 1, this was carton 2 and so forth. If that’s the way it works, then you should know by that which cartons go with which jobs.

This is something our old system did, so we knew the order of the cartons coming in the door, not just based on lot numbers. Then they used carton 1 first, etc.(issued to jobs that way).