Material, labour and burden costs of subassembly all rolling into material cost on job

We have recently gone live with E10 and have noticed that subassembly parts (manufactured parts with a MoM) consisting of material, labour and burden only seem to show as material costs on the job.

After completing and closing the job and running capture COS / WIP, we are seeing large adverse material usage variances with opposite favourable variances in labour and burden.

As an example we have a job for top level part A which requires subassemblies part B and part C. Both parts B and C (components of part A) are flagged as view as assembly only in the MoM of part A:

The costs of subassembly parts B and C are showing as material cost on the job rather than their constituent parts of material, labour and burden.

To have subassembly costs roll up in the same bucket (i.e. labor stays in labor as the job progresses), you need to set Enable Mfg Cost Elements to True on Company Configuration. 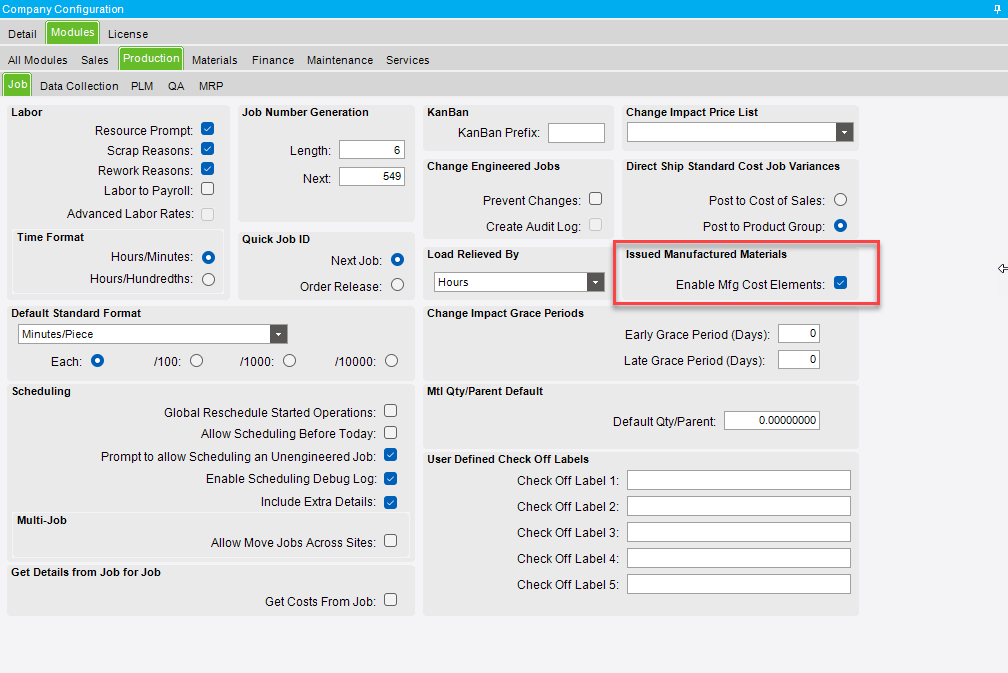 Thanks for the response.

We’ve tested this and still seem to be getting the same outcome.

I can see the granular cost breakdown in material transactions:

But this doesn’t correspond with the unit cost breakdown in the job material detail. 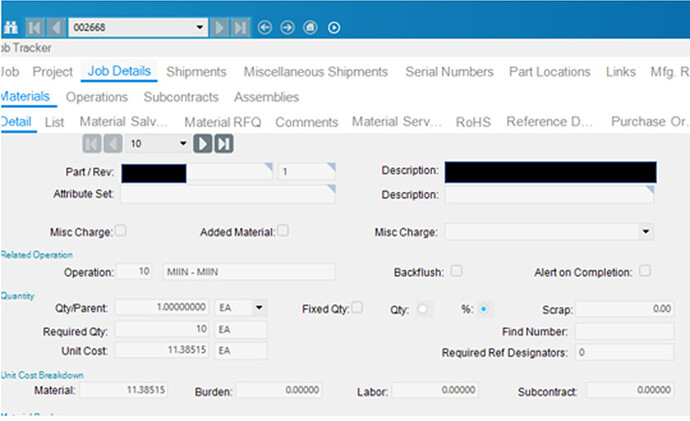 For us the subs separated actual values will be in the assemblies tab under Mfg Elements.

Thanks for the reply.

Both subs had values in part tracker for material, labour and burden prior to the job being created.

Below is a screenshot of the costs under the assemblies tab showing actual to estimate:

Are your subassemblies received to stock and then issued to the job?

I have cost elements checked and get the details on subs built to stock and issued to job like below but my material detail is not broken out. We don’t build job to job so I don’t know if that would be different.

image845×207 64.7 KB
@J_Dewhirst costs have nothing in cost elements and the mfg elements has the same value as the material detail where they are broken out.

I assume that is the effect of the check box in company config.

Jobs have the checkbox, too, FYI. It defaults from the company config, but it can be changed.

Does anyone know of a way to maintain manufacturing cost elements (i.e. use the functionality enabled when “Enable Mfg Cost Elements” is checked) in one scenario, while using the default job costing method in all other scenarios? Essentially, we need to maintain the split-out cost elements if we manufacture a part to directly fulfill a material line on another job using a direct job-to-job demand link. We’ll use the cost elements to pass along labor cost from one job to a separate job that isn…

In the example above the subassemblies were issued to the top level job from stock.

We also have subassemblies that are receipted from job to job.

Would subassemblies issued from stock vs. receipted from a lower lever job have an impact on the breakdown of estimated job costs at a higher level?

I believe that when you issue material from stock to a job, all of the cost goes into the job as material. You can see the breakdown of the issued material in screens like Part Tracker, but I do not know of anything that will issue material to a job broken out. I do not know what happens on a job to job transaction.

More importantly, I would not think that you would want to have the issued material broken out as then the financing end would probably end up wonky. If you manufacture a part and receive it to stock, you are recognizing all of the material, labor, burden, etc. If you were then to issue the material to a job, it would end up looking like all that labor was on the job when that is not true. I understand the ask, but I think you would be better off trying to create a report to do what you want.

If you were then to issue the material to a job, it would end up looking like all that labor was on the job when that is not true.

Sure, but I think this is exactly what happens when you “enable MFG cost elements.”

We did this for a year or two here. And then we changed it because it was annoying. Like, what if you bought the part that you sometimes make? There was no labor in that case.

But I think some people do like them combined. A previous production manager wanted that info (well, he wanted total hours).

But I do wholeheartedly agree that it is 100% the better option to not to the split elements and have the elements be recorded in the “MtlLbrUnitCost” rather than the “LbrUnitCost.”

Because from there you can always combine the data for reporting.

Whereas if you do split the elements, it gets much harder to split it out later if you need to. At that point you are needing to tally up the LaborDtl records for the job and subtract out the costs from the job’s total labor costs.