Start activity with a barcode

I’m new to Epicor and I’m trying to implement a barcode system. I would like to be able to start activity with a 1d barcode. The issue is that when you enter the job number there is a delay/pause in the drop downs to load the Assembly and operation on the Start Production Activity screen. Has anyone tried to accomplish something similar to this?
Thank you.

I’ve not tried it yet, but if the ‘tab’ character embedded in the barcode isn’t enough to make it work, then could you take the whole barcode value into a custom field and break it apart in the FieldChanged event to fill in the other fields? I can think of a few ways using customization+code combinations.

I’ve done this a few times for client projects, using a concatenated barcode with the tab character between Job and Assembly, and between Assembly and Operation on tethered scanners. On one project, the scanner read the barcode faster than the system could take it. I ended up using an application called 123Scan from Zebra to program a keystroke delay between characters on the scanner. Took a little trial and error to get the right delay but now it works well. The 123Scan app is also great for creating and saving the right set of configuration settings that can then get loaded into all your other scanners.

I second concatenated barcode is the way to go, but run a trace and build the logic yourself in a customization vs trying to use delays.
Create a single field, split the concatenated barcode up on leave (add a scan suffix of tab to the scanner hardware itself not the barcode), and run the same logic epicor would if you entered it in field by field. way faster, most reliable. An EFX would be great for this if you’re on a version that supports it.

Yes, I remember some delays that could take long enough that the scanner time out. And the older the system (the more jobs) the worse the delays. I believe the ( significant ) delay usually only occurred on the first activity to be started after a fresh MES session was launched.
But… I believe that once the combo is initially populated, there were no more dropdown delays as long as MES remained open?

concatenated barcode with the tab character

Yes, I have also used the concatenated bar code
In addition I have also needed to customize the start activity form to get around any delay. ( an old version V8 - with many many jobs since they never purged )
e.g. I ended up adding my own controls so I could bypass the “dropdown delay issue” 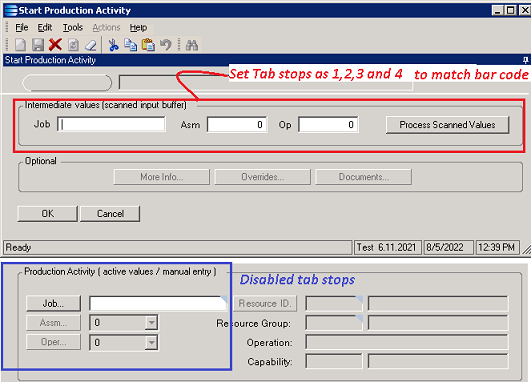 That customization looks interesting, do you still have the code that you use? Or the steps to re-create it?
Thank you

code that you use? Or the steps

Sorry I only have a preliminary VB example from an old V8 Test system.
TBD if helpful but… if I remember the coding wasn’t too hard. most of the “fiddling” was spent in getting the tab order on the form to match the custom bar code on the job traveler. If you search this site I think you’ll find several good examples of concatenating bar codes.