Just wondering if anyone has heard of or implemented some software called Tulip?

Apparently it allows you to easily build Apps for Work Instructions, Production Visibility, Quality Control, Machine Monitoring, Training, Audits, and Lean Manufacturing. Tulip tells me that they have implemented several Epicor integrations. I just wanted to see if I could find someone out there who has implemented Tulip with Epicor to ask some questions about how they set it up to get it working. I will be attending a demo of Tulip in a few days where I will ask more questions about it and the Epicor integrations they have done.

Thank you for any thoughts or help anyone can provide!
-Heather

Hi Heather - I will be working something similar soon with Tulip and will reach out as I learn more on my end. Have a great day!

Hi Ed, that would be great! I will do the same! Thank you for letting me know and any additional information that you find out about it and can share would be much appreciated! I’ll update this thread with the knowledge I can gain from my call with Tulip too. Thanks so much again!!!

where I will ask more questions about it and the Epicor integrations they have done.

I always ask companies if they can keep up with the cadence (if a company chooses to do so) and if they can work with people in Azure (Epicor SaaS or otherwise).

Great thoughts Mark! Thank you! I will definitely ask them those questions!

Hey, @ERPSysAdmin did you ever implement Tulip?

We have been using it here for a few months (maybe a year?), but only now am I being brought in to integrate it with Epicor.

I like what I have seen, but I am diving in the middle of all of this. Our Manufacturing Engineer is handling the Tulip side, but he doesn’t know Epicor. So it’s an adventure together!

Oh boy, sounds like you are in for some fun! And just in time for Spring!

LOL Well we had the same kind of scenario. Our Manufacturing Manager, who brought Tulip in, wasn’t entirely familiar with Epicor and with no warning or consultation I find out they purchased it and now want it to integrate with Epicor. They did implement a few forms in Tulip that they are using on a daily basis but it isn’t connected to Epicor. I do have notes on how to setup the Connectors in Tulip using REST to pull data from our Epicor Database. Just to start out, I locked down the Tulip user’s access by using the Access Scope Maintenance and I only gave them access to a few BAQs. Because, of course, I didn’t want them to start adding and deleting records.

I was really hoping that our Tulip power users would test the Connectors and then let me know if they needed any additional access to the database but then of course the Manufacturing Manager retired soon after and now only a few people are still using Tulip and they aren’t pushing further implementation of it much right now. But it would be wonderful if the notes I have could be helpful to you in some way! I would feel like all the time spent getting that setup figured out wouldn’t be entirely lost.

I can PM you and get your email and send you my notes.

Ha, that’s pretty funny that it was a similar situation. I’ve done the same things with Access Scope and a special API key for this.

Today we spent an hour trying to turn the JSON into something table-ish for the Outputs of the function. I learned:

After about 55 minutes we found the Outputs tab in the test screen. THAT would have been nice to know at the beginning. We kept rewriting and testing his app instead. I am burnt out for today!

But like I said, I know nothing of the app part of Tulip. Not that I am dying to learn, but I guess I need to be familiar. 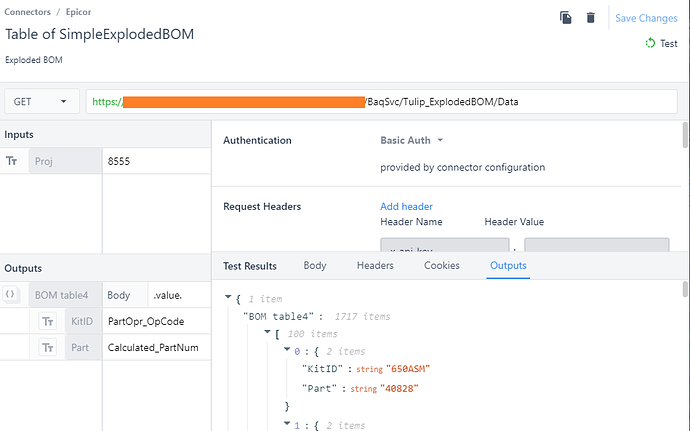 I saw there is a passing mention of Epicor on Tulip’s site, but it’s about Prophet 21, not ERP. But like you said, not that it matters; REST is REST.

Expect that PM in a minute…

OK, I think I got the ropes now. This is pretty sweet. I have no idea what the pricing is on Tulip, but I like it.

Here is the walkthrough:

Your documentation is a LOT nicer than the documents and notes on Tulip that I sent you.

Way to go on pulling that all together.

Lol it took me literally all day today so far. I did the whole setup over again, with screenshots and ScreenToGIF (which I learned about here).

There are SO many steps to keep track of. I’d never remember it all.