When a job is created in Company1, look at all Subcontract operations in the job. If the supplier is Company2, create a PO matching the part, quantities and pricing. On the Company2 side, automatically accept the PO, create an SO for said price and quantity, and create Job if possible.

This is much easier said than done. We know what we want to do, but I’m not entirely sure how to pull it off. I’m assuming this can be done mostly through Method Directives but not entirely sure which Methods I should be using. Should I begin with the OrderJobWizard.CreateJobs method or should I start with something else; like JobHead.GetNew?

I can probably figure out the custom code portion, but I’m not familiar enough with the methods themselves.

I did run a trace, during Sales Order creation and creating the job with the job wizard, but I don’t see where I would actually look at the operations that were made. Do I need to run another trace, create a job manually and add my own subcontract operation to get what I’m looking for? I’ll try that now, love coming up with ideas as I’m typing out a topic!

I may need some hand holding, if anyone is up for the challenge…

Can you run MRP on Company 1, with Company 2 being a subcontractor for the operation on the Company 1 job? Then you could convert the subcontract purchasing suggestions to PO’s.

That would get you halfway there at least. Not sure how that would work on Company 2 for the PO acceptance side.

This is how we currently operate, but we don’t want to rely on our AP guy to convert the suggestions into POs to keep the ball rolling. Also, the suggestions only get generated twice a day, once around noon and again after we close.

What we would like to see is when a sales rep converts a quote into an order and cuts the job, Com2 receives a PO for the subcontract work within minutes. Then we want Com2 to see the operation in their work queue once the previous operation, on Com1 side, is done. We would like to see this flow as close to real time as possible. If that makes sense, or is even possible.

You can set up some of it with the multi company process, but there is still some user interaction.

My initial thought is a BPM in Company 1 to create the PO and a scheduled process in Company 2 to pick up the PO with a cross company BAQ and create the order and job based off that data.

I’m not familiar with the multi-company process, like setting up external companies? I just did a quick search and found this below. I wonder why no one here has ever looked into this before. I went into external company setup and there’s nothing there (least that I can see). So our companies aren’t talking to each other like they should? 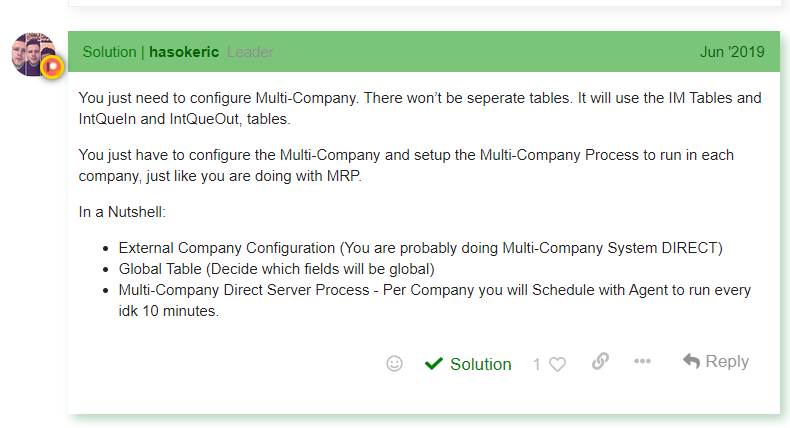 Never mind, I just found the external company setup. Had to change the system to Multi-Company Direct. We have PO suggestions setup already. But we’re looking to bypass suggestions so our other company sees jobs sooner than they are now.

I guess a little context is needed. We have 8 companies, Caster Concepts being the master. 3 other companies exist inside the Caster Concepts building, the other 4 are a short drive away, <5 miles. What we’re trying to do is decrease the amount of time it takes for our other inside companies to see upcoming jobs.

Does the PO itself have to be generated immediately? If not, a cross company BAQ could be used to create a simple dashboard that displays all subcontract ops and their designated vendor/company. Could also include column that shows if a PO has been created yet.

This would be a good first step in providing visibility of upcoming/released jobs. This could also be turned into a UBAQ, that could possible help automate the PO creation process. *Think instant po suggestion without having to run the suggestion process.