Continuing the discussion from How to properly throw an Exception in BPM:

In the previous portion of this discussion, I was trying to figure out why I keep getting 2 Exceptions thrown when I use the “Raise Exception” block, or if I use:

in a Custom Code block.

I have tried everything in my power to eliminate one (or both) of the exceptions, while still having the end-goal met, which I have not been able to successfully do. So, I decided to take a step back and see if there is another way that I can go about this.

OBJECTIVE:
On the Issue Material screen, I need to catch when a user enters a LotNumber and run some logic against the entered/selected value. 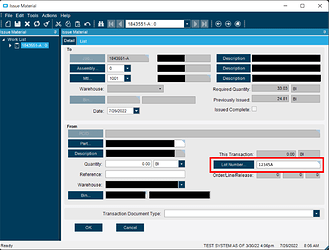 I would think that a Method Directive BPM for this would be the proper plan of attack, so I started a trace and saw that OnChangeLotNum method was being called from Erp.Proxy.BO.IssueReturnImpl when a new LotNum was entered/selected. Using that knowledge, I created a Pre-Processing BPM on Erp.IssueReturn.OnChangeLotNum.

That BPM has a few blocks: 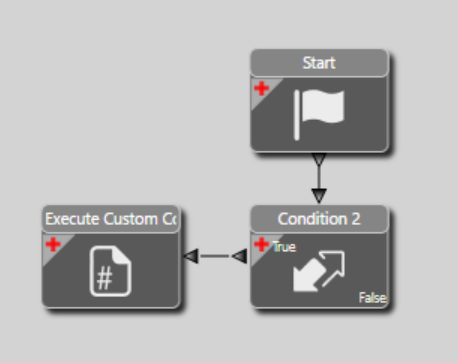 The custom code block has some code in it that does the following:

All of that works absolutely flawlessly. WIth one exclusion, which can be found in my original post, here. Long story short, 2 different exceptions are being thrown, and that is not desired.

So, my question is: is there a better way to basically ‘revert’ everything that happened in OnChangeLotNum? I tried setting the pcLotNum to null and “” with no avail, that causes a box to appear saying that a Valid Lot Number is required.

I have also tried to set any relevant fields in ttIssueReturn back to their previous values, and nothing seems to do the trick. I have tried doing the logic strictly using conditional blocks in the BPM Workflow Designer, and my results are the same as when I did it all in the Custom Code block.

Any advise as to how I can ease this headache and get that LotNum field back to a blank state?

@jkane - That’s not the issue. All of conditionals in the code work as expected. The issue comes into play when I try to throw an exception to halt processing of the BPM and ‘roll back’ the changes. I keep getting 2 Exception windows when throwing the exception, so I thought maybe I was going about this process the wrong way and that stopping a BPM can be done in an alternative way.