Have BPM only trigger if new record

This is a follow-up to a previous question I had (thank you for your assistance, @bordway).

However, I am running into another issue with that same BPM. Here is the scenario:

Now this works great if the user is entering a new job number, however the BPM is also triggering for existing jobs that end in “-LC”, which is problematic if someone is going to try and change one of those jobs.

Is there a way to have the VaidateJobNum BPM only trigger if it is a new Job Number, and not an existing one? Am I using the wrong method for this perhaps?

In condition,
try “The Specified field of the changed row is equal to the specified expresion”

In condition,
try “The Specified field of the changed row is equal to the specified expresion”

I am not sure that this method call has a changed row. I think it is a special method that passes parameters (not sure).

I think you could add a check for added record to your condition. Like this:

I thought about that, but there are no temp tables for the ValidateJobNum method.

no temp tables for the ValidateJobNum method.

Hmmm… I wonder if you grab the parameter - ipJobNum
store ipJobNum in a BpmData field and then do you condition check on that? 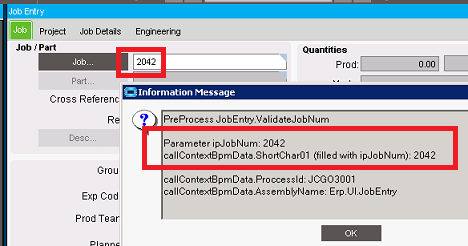 I am already looking at ipJobNum (which is how I know it ends in “-LC”), but I am unaware of a way for me to query the DB in a BPM to see if that JobNum is pre-existing or not.

a way for me to query the DB in a BPM

I haven’t actually tried it myself, no idea if it would actually work.
I was thinking, off the top of my head that something like the query condition below? 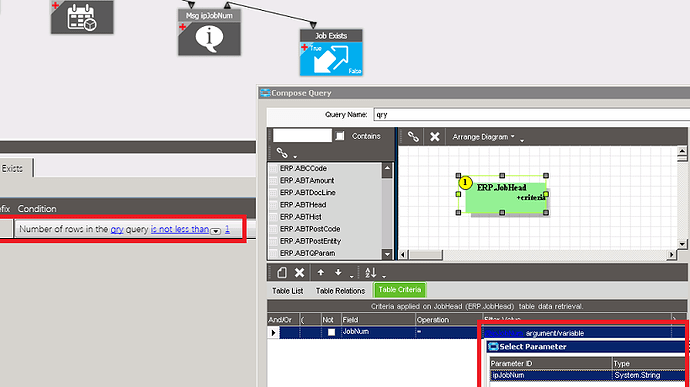 THAT is what I was missing! Thank you!

Out of curiosity, is there a reason you’re using JobHead.ValidateJobNum instead of doing a pre-processing directive on JobHead.Update, with a top condition simply: If the ttJobHead.JobNum field of the Added row…?

If you do it on validate, it tells you right when you type it in, instead of when you try to save. It’s a better UI experience. But you are right, that update would work, and is an easier BPM to write. Also, it’s common to do both since update is a better gatekeeper for security type stops just in case something manages to slip through.