Just some fun with Excel

So my middle child came home yesterday with a project, to make Excel Pixel Art for an assignment in his gifted class.
I didn’t know what Excel Pixel Art was until then and he showed me what he did. He spent most of the day manually coloring cells in Excel to make a representation of Starry Night.

While his representation wasn’t perfect it was pretty damn incredible that he did it by hand. I decided to have some fun with him and told him I could make ANY picture into XL Pixel Art in 20 minutes

He bet me I couldn’t so I wrote a quick .NET Program that turns any picture into XL pixel art. Another “fun” aspect is that while I did write it in 20 minutes and it worked I had transposed the X and Y axis of the photo in the code so the image was coming up inverted, he was a good sport and still let me get the win after all it was only 20 minutes of code.

This morning I came back and after staring at the code for a while trying to figure out my inverted image issue @Banderson suggested we ask Chat GPT for help.

It immediately figured out and fixed the issue (in my mind X and Y columns / rows was inverted for some reason) anyways it now works with the Right Side up Images and it is just plum fun!
I also made it so you can load ANY image and convert it

Here’s the Git Repo of the Code: GitHub - josegomez/PXLArt: Excel Pixel Art Generator from an Image. 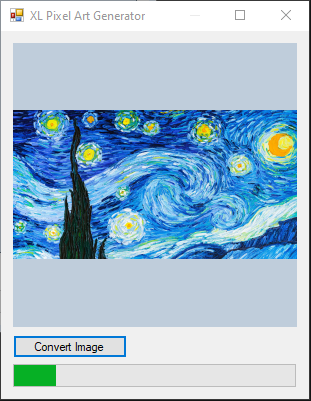 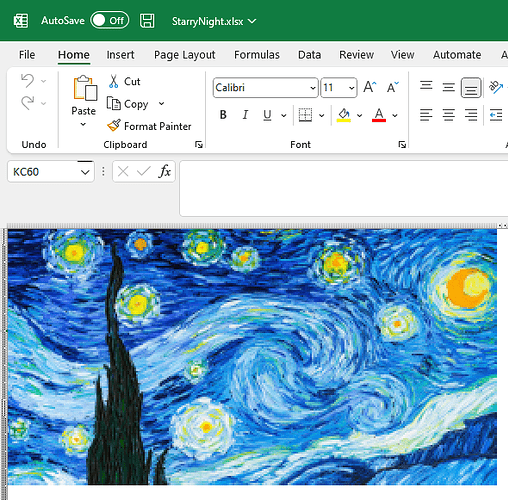 Feel free to Turn your co-workers or your cat into XL Art!

Cool Stuff! Nice work. Do you have a version for Lotus 123?

So sick, thanks for sharing!

You know I bet I could ask chatgtp to adapt it…

Sorry @Vic Woke Bot thinks its a waste of time

So I guess Quatro Pro is out as well…

Since the support of Quatro Pro is discontinued, and there is limited developer documentation that can guide you through the process, it may be more appropriate to use a different spreadsheet software

What is WokeBot?
I go to OpenAIs site to access chatgpt.

haha it is chatgpt “we” (a few of us in this forum and elsewhere) call it WokeBot cause sometimes when you ask it for something you’ll get a lecture along with the answer. It has a lot of code in there to make sure nobody gets offended and sometimes you run into it and get a lecuture even with something innocent.

Yeah yeah sit on your damn high horse there WokeBot!

Cool Stuff! Nice work. Do you have a version for Lotus 123?

Dammit, give me a minute.

Very nice, seems your son takes after you. Kudos.