I just want to complain for a minute and see if anybody else agrees with my frustration. In kinetic ideas, we only get 50 votes. I think this is absurd. Epicor has literally thousands of modules with millions of increments of functionality. To say that I can only “want” 50 changes is ridiculous. Every time support disagrees with me that I have located a bug in Epicor, they tell me to log an idea since they refuse to actually fix the bugs. But I am now reduced to posting ideas with zero votes since I have none left. That’s not even counting all the great ideas for ACTUAL enhancements other people post that I can’t vote for either. I even posted an idea that we need more than 50 votes and they marked it unlikely to implement! Why? Well because they decided people should get 50 votes and that’s that (typical Epicor because I said so BS). Anyone else? Just me? If you want to vote for my idea (since I can’t), it’s here: Kinetic Ideas

1000% yes. My real anger is that I spent years before Ideas submitting tickets, like you, for what are certainly bugs but they consider to be enhancements and NONE of those old enhancement requests were moved over to Ideas. They said I need to resubmit them all. I mean (a) sure, I’m offended by that, but (b) give me more than 50 votes if I have to do their work for them.

Here’s a Venn diagram of the process:

I get why they do the 50 votes thing. Votes are currency. If you have unlimited currency, then the vote means nothing. If you have to allocate the 50 votes to the things that are actually most important to you, then it means something. You can remove votes, and move them. So go look at the votes that you have already cast and decide if that idea is more or less important to you and reallocate accordingly.

If someone came to you and said “I want these 100 things fixed right now” and you asked “Which one do you want first?”, then just said “All of them right now”. That doesn’t really help does it?

Epicor is a company (just like yours) with limited people, limited resources, and limited time. They have to decide what to do and not to do, because they cannot do everything.

I agree with having a limit, but 50 is not realistic when there are literally thousands of things that need to be fixed let alone enhanced. A limit of 500 would be more reasonable. It would be different if support had any logical conception of what a bug is, but when they literally refuse to accept anything as a bug and everything must be an idea, what are we supposed to do? Just stop caring that the software is broken?

It would be nice if they updated the ideas portal when an idea is actually implemented, then gave you the votes back when the idea was completed. (that’s how it says it’s supposed to work, but… updating…) 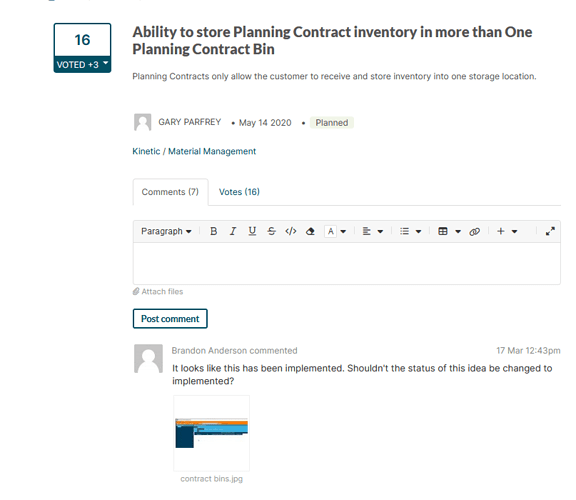 Well now you are dreaming, I agree it would be fantastic if they started knocking things off the list and accurately tracking the status on Ideas!

Fixing things doesn’t bring in revenue, but adding twitter to your ERP application does. I don’t recall seeing “add twitter” to the top of the ideas list, but this is what makes brands stand out. This is what sells. You can market the mobile CRM app or social enterprise a lot more than you can market the “ability to store planning contract inventory in more than one planning contract bin” idea.

There’s also this marketing concept that you don’t ask consumers what they want because they don’t know. So the whole ideas thing is interesting to me.

Give Customers What They Need (Not What They Want) (forbes.com)

Either way, bugs are bugs and I am with you @aosemwengie1 I have also been on the other end of the “that’s going to be an enhacement” conversation when what we are looking at is clearly a bug and there’s no way that the program was intended to behave the way that it is.

Yeah well that’s the idea behind their whole telemetry project - to find out how users are really using the application and use that to drive improvement. It’s just that these concepts to me are levels beyond where Epicor is in terms of organizational maturity. Like, have a coherent definition of what a bug is and fix them in some rational manner. Don’t use an enhancement request platform like Kinetic Ideas as a cop out to avoid tracking and fixing your bugs. But I understand that fixing bugs isn’t what makes anyone a sales leader.

If you have to allocate the 50 votes to the things that are actually most important to you, then it means something.

I completely agree with Brandon here. You absolutely need to encourage people to prioritize.

That said, there is room for improvement. There are 1200+ Ideas marked for Future Consideration. A few of those have to do with the state of records being Active/Inactive or the how we name those fields (inconsistency some say Active and others say Inactive). If Active/Inactive is important then you may have to spend some of your “money” across several ideas which dilutes the main issue: hide inactive records by default, be consistent in naming. That is one idea with votes going to multiple places.

The other issue is with specific modules. Projects users have wanted to be able to ship from inventory against a project for years. Non project users don’t care. Votes are going to be higher for areas of the product that are common to more users. That’s fine if every developer at Epicor works for any department. If developers are assigned an area (system, finance, manufacturing, ECM, etc.) then are votes really allocating the resources properly?

If the point of Epicor Ideas is to determine customer priority. I don’t think it’s working. Once out of votes, you’ve lost that feedback from that user.

I’m sure there are other ways to make Epicor Ideas better. I just don’t have many votes left to enter them.

Absolutely. I will say, they haven’t completely lost feedback from users who are out of votes, we are still able to write comments on other people’s ideas as well as create new ideas (with 0 votes). But if they are strictly looking at votes then yeah the input is lost.

I keep seeing Epicor ads on Facebook. It gladdens my heart that the reacts are about 2/3 lols.

The first vote doesn’t count against your total.

Meaning your vote for your own idea? I like that a lot. That would go a long way.

No, I mean the first vote for ANY idea doesn’t count. In Microsoft’s User Voice, you can vote once for anything - unlimited number of votes. But you only get one per idea. With extra votes, you could put “your money” where you want to add more desire.

It would be nice if ideas were curated to remove duplicates and to refine actual need. Having an effort assigned to it by Epicor might also help with the voting.

So support again told me to take one of my bugs to kinetic ideas. I replied that I can’t because I’m out of votes. Direct quote from support: "About the Kinetic Ideas, you can try to add a new one from a different user. "

Some of the issues that I suggested when testing Kinetic in 2019 and 2020 were never implemented.
I am just making up a library of standard screens that I will deploy with a better user interface.
I am learning a lot about App Studio and how to adjust to make Kinetic more efficient.

Kinetic’s Process MRP screen has a clipped Cut Off Date box when dynamic is selected, so I submitted it as a bug on EpiCare (considering that we can’t change the size of the box in app studio either). Development responded with ‘submit it to Ideas as an enhancement’.

Umm, that’s the thanks we get for trying to help them identify & fix issues! And I’m out of votes. I’ll send a dollar to Greg for +3 votes if I bother submitting it!

That’s clearly an accessibility issue. I’d open and escalate the ticket. That’s not an “enhancement request” push back!

I totally agree - its just frustrating that support’s response to EVERY bug is now log an idea. They literally told me that having available credit calculate correctly on national accounts should be submitted as an idea. Like really? How about this idea, fix the bugs?