Hello,
I’m curious what other companies due to manage requisitions in Epicor? Do you use the native version (seems like you’d have to customize it quite a bit…), purchase Advanced Requisition Management (ARM) through Precise, or another method?

Some of the musts are a hierarchy of approval process through a flow, trackability, and reduction of double typing is a plus (such as automatically turning it into a PO).

Let me know your feedback! Thanks in Advance.

We are using the out-of-box Requisition Entry in Epicor. We have been using it for 3-4 months-ish.

It was rather confusing to set up. I meant to collect my notes and do a post here. Terminology is inconsistent here and there.

In hindsight, there’s nothing to it. The roadblock is always learning the mangled jargon. Help files are nearly useless, but I think there were some helpful details on EpicCare.

On day zero I made a dashboard to show the status and details of all requisitions, because how would people ever know what’s out there?

Also, there is a weird thing where if the requisitioning user is herself a buyer, it assigns the Req to that buyer. Well, kind of. It does this if it no default is set here and there and the other place. And that was our situation.

So, to back up a step. In my mind, there is no earthly reason anyone would ever make a Req for a part you have in your part master. (Yes, you know it’s happened here already several times.

) To me, you would only ever do a Req for MRO. And MROs would always be charged to an expense Part Class. As such, I made all of our expense Part Classes to have a default buyer named REQS. And then a couple people monitor that buyer’s suggestions.

We tried OOB Requisitions. We dropped it after a pilot program, for the following reasons

Approval process happened only after it was turned into a PO.

The “dispatch” process has approvals built in. Here’s how we set ours up:

I numbered them, but a Req can go through the process in ay order, to accounting then manager then COO. I mean, that’s stupid in my book, but I’m just making the point that they system does not force a Req through a hierarchy. It just has to be approved by every level you decree as mandatory.

We use requisitions out of the box. There is a customization to notify somebody when a requisition is waiting for approval. It works ok.

FYI, this was the big terminology hurdle for me: 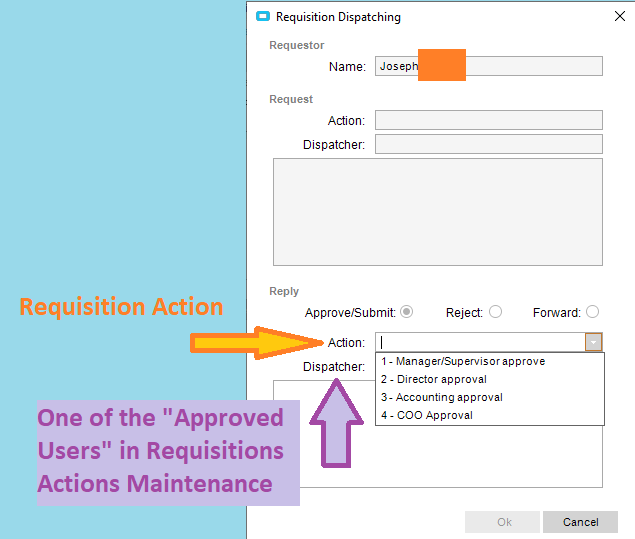 You get to this from the Actions menu in Requisition Entry, I think.

Oh and that’s an old screenshot from testing days. That’s why some of the actions are missing here.

I’ll admit I didn’t bother too much with Requisition Actions. Mostly because it doesn’t really match how our process works, which is to move through an approval hierarchy (which is variably based on cost, the GM doesn’t want to waste his time on a $500 expense). Plus, you had to have the user select the next course of action.

At best, if you fiddle with it via BPM’s, it basically duplicates the buyer hierarchy anyway. That system, while unfortunately tied a PO, works like I’d expect it to.

variably based on cost

Right, reqs out-of-box do not have a setting for cost as a factor.

I also dislike how everything on the Req and PO side is tied to a specific user account rather than being position based. I’d actually ditch the buyer system and roll it into Employee, attached to some kind of role code-like system. One stop shop for managing what this person is authorized to do in terms of expenses.

The whole thing, as is, is just kind of scattered and (again) inconsistent.

Personally I would love to revamp the requisition system but we simply do not have too many people screaming for new functionality here. In 16 years of implementing and reviewing processes from 100s of customers I found very few that used the module. Maybe because the approval process is a little weak, but I think mostly because companies have other processes for approving non-inventory/non-wip purchases.
On occasion, for smaller companies who wanted something I also would tend to suggest that they simply create buyers for all employees that make requisitions, and assign those “buyers” a $1 limit. Then have them create their own POs which need to go through the PO approval process, skipping the requisition altogether. This can save time on pos that are for capital assets since the po already has all the details and doesn’t require double approval of the req and the high valued PO.

In 16 years of implementing and reviewing processes from 100s of customers I found very few that used the module.

I’m wondering if there is really little interest in the module, or if customers either already have something better, or bigger fish to fry than to worry with it

I’m not really familiar with it, but I wonder how different the current implementation differs from the norm. (if there is a norm)

Just musings. Might be something Epicor would reach out on to find out if there is interest instead of assuming disinterest just from lack of use.

Might be an opportunity for some new selling points.

Personally I would love to revamp the requisition system but we simply do not have too many people screaming for new functionality here.

Interesting, across the four companies and 16 years, all requests for a better requisition system were met with offers for ARM. I just figured that Epicor had an understanding not to compete with a partner.

Well thanks everyone! Would still love to get feedback from an ARM user out there.

We were almost an ARM user. It has a very nice approval system and budget feature that we really, really liked. The downside was cost. At that time, not sure if this is still true, there was only one price per seat. Didn’t matter if you were just an approver, requester, or purchasing agent. That many licenses was just untenable for our size company.

Personally I would love to revamp the requisition system but we simply do not have too many people screaming for new functionality here. In 16 years of implementing and reviewing processes from 100s of customers I found very few that used the module

Chicken or the egg? I tested the OOB requisition module last year (since we own it), and it really doesn’t do anything useful for us with the limited features. Our goal was to find a process to manage the various miscellaneous expenses from our construction crews that end on on AP Misc Invoices, and I couldn’t figure out a way to do this with Epicor’s requisition system. We didn’t want purchase orders at all for our reqs, which didn’t match Epicor’s intended process (you can approve the req w/o a PO though).

The Advanced Requisition Management (third party module) is nice and can do that, with a whole lot more (great demo), but wasn’t cost-efficient with the number of seats needed for our wide occasional user base.

We’re attempting to do something with Microsoft Forms right now…