Wondering how you all deal with frustrations with Epicor Support, and any suggestions for who at Epicor we should talk to about this? I know this isn’t a new problem, but with the new Kinetic UI, I am having to deal with the Epicor Support system more and more, and the frustrations are mounting…

I have spent most of my day dealing with Epicor Support on clearly reproducible issues, and have provided a technical description of the problem (with experience as a software developer), guiding them to the root cause.

Usually it starts with them not reading the details of my case, and asking me the same questions I have already provided.

Next I get told they cannot reproduce the problem, despite it being a universal issue that other users (not just my company) are experiencing: Kinetic UI not working with barcode scanner with TAB suffix

In another case I am on a Teams call with the Support agent, being taken on a ride of basic checks that I have already gone through myself before submitting the ticket… Menu maintenance? User security groups?
When that is all fine, we jump to being asked to redeploy App Servers, reinstall .NET, maybe your SSL Certificate is no good, etc… when that is clearly not the issue. I already told you what the problem is… Epicor is malforming the URL when you click the menu item to open Project Scheduling Board… I can manually correct the URL and it works fine…

I am at the end of my day and I’m angry.

I am averaging a new ticket a week. I have 5 open cases, and they all are going this way…

Does Epicor not understand that the people submitting cases to EpicCare are probably not the end-user receiving agent or accounts payable clerk? Our end users come to us, we go to Epicor Support. We typically have a good idea of what is happening behind the scenes. We don’t need to start at ground level.

We’ve had the same issues, and we don’t know where to go from here either.

You don’t want to be an asshole, but sometimes you have to be one.

Our success with that has been spotty as well though.

I think they need a major overhaul.
Needs some accountability, escalation system.

Ha, I expect nothing less from The Kevin.

I know, it is a bit of a crybaby rant. I needed to vent.

I know, it is a bit of a crybaby rant. I needed to vent.

I really don’t think it is.

It seems there are enough real tangible problems, and verifiable examples of
issues that really do need discussion and feedback.

Hopefully if it was a productive discussion, Epicor might even pay attention.

I totally agree - ZERO accountability and Every whimper promptly ignored or reflected back as OUR fault in some way.

Sadly they do have some exceptional, professional, and knowledgeable people. It’s just that they have always been hard to find and seem to be getting scarcer.

Another rant from another Kevin…

When I call the pharmacy and they give me this entire tree to go through, including entering my birthdate - I eventually end up with the pharmacist on the line who asks me all those same questions. I’ve learned to press 0 five times through all their prompts to get directly to the pharmacist. I feel like I’m at that same place with Support. I can enter a ticket with instructions down to a gnat’s a$$ on how to reproduce the problem - it doesn’t make a difference. I literally have a ticket open now where I’m asked for steps to reproduce. I responded “all that’s in the ticket”, and I was told by the support analyst WORKING THE TICKET that she doesn’t have access to the details on the ticket. How the **** are you a support analyst working a ticket and you can’t see the ticket history???

Second rant, I’m running a conversion to the Epicor cloud from an old version of Vantage. I’ve got an issue with user security - can’t add users. They’re able to duplicate the problem on their end, been working it for two months, responded this week they can’t figure it out and lets wait for data pass #2 (6 weeks before go-live) and see if it’s fixed then.

Not a good week for this thread - frustration is pretty high.

I’m with you. I open several new cases almost every week and my experience is the same as yours. I try not to let it get to me. Just accept that epicor support is awful and your experience 99% of the time will be a massive and frustrating waste of time, then move on with your day. I really hate to say that because there are a few epicor support reps who are extremely knowledgeable and truly helpful. Even some who read and answer questions on these boards which they don’t have to do. Whenever I get one of those techs on my case I am so grateful and appreciative. But the majority don’t understand the product and are too overloaded/undertrained (charitable interpretation) to perform the most basic steps they should be doing, like reading and understanding the case.

At one point they had added the ability to answer a survey about each case. I used to do that on almost every case with specific details about their shortcomings and mistakes. Now the button is gone. Not sure if its gone for everyone or they just got sick of my feedback and don’t want to hear it anymore.

As far as solutions, there is a higher tier of support you can pay for (forget what its called), and all your calls will go to tier 2 techs so you can skip the first line of support. If your company is willing maybe you can look into that. 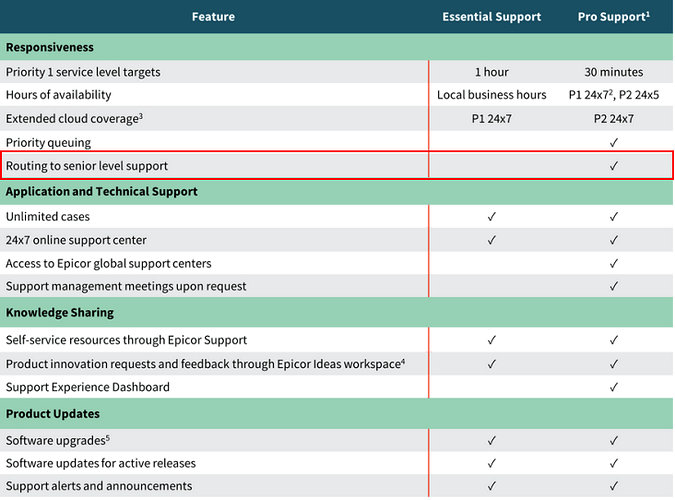 There’s a support system for Epicor, besides this forum?

Found it, its called Pro support:

Does that make the other tier “Amateur Support” ?

We get it there are no less than 10 threads about this they always devolve into a “me too” extravaganza and a support sucks pile on. Which frankly isn’t helpful to anyone

They know, we know, it is known. Support sucks everywhere all the time it is nature of the beast. They also get their fair share of flack just due to the nature of their work. They are basically the complaint department it sucks all around.

I recommend escalating to your CAM that failing you can escalate all the way to Steve (I know I have).

I understand if you’d like to lock or remove the thread, I should have known it could turn into a complaint fest.

I needed to vent and truly was looking for some suggestions on how to deal with it… which it sounds like we just need to keep fighting the good fight, remain friendly and professional.

Is anyone from support management on EpiUsers? 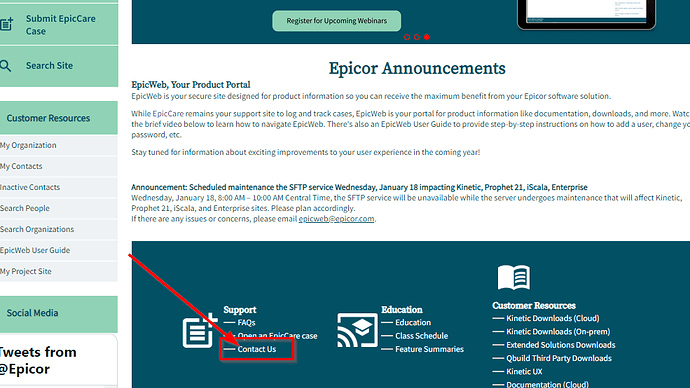 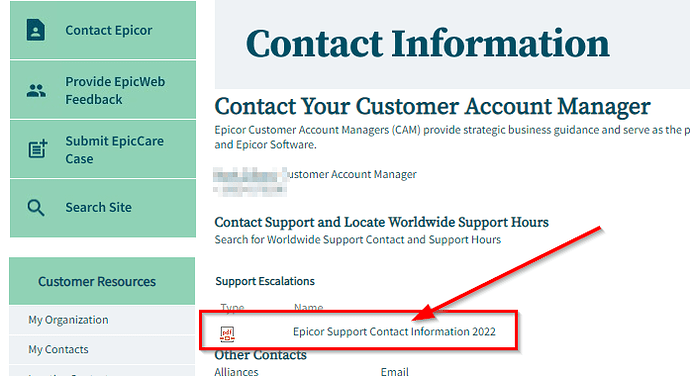 This is exactly the kind of info I was hoping for.

Is anyone from support management on EpiUsers

I’m not going to tag him by name, but he’s posted many times on sysadmin stuff.

I could let this go without asking if “Support Management meetings upon request” is a real thing. And what they are (if real). 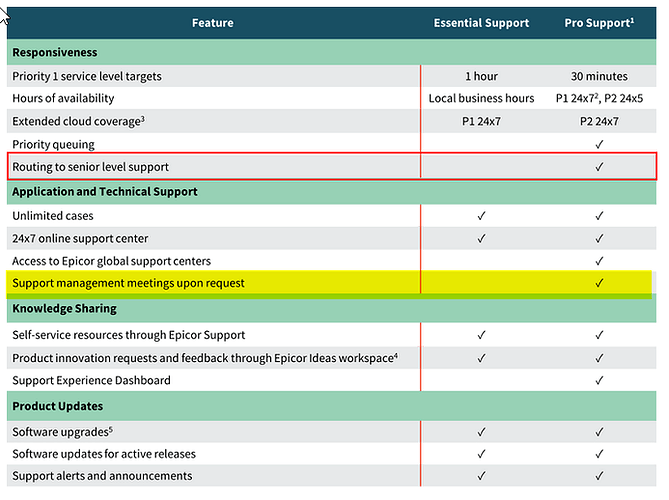 Seeing Managers, Sr. Managers, Directors, and VP’s from other Epicor departments join the party here and open themselves to candid feedback benefits us and them! It’s great to learning why things are, which might not have been obvious to us end users.

I hope that a VP or SVP from Epicor Support will join our conversation someday. We would all benefit.

Sorry I was sure I had seen him on an old list but I was clearly wrong; I found that old list and he is not there.

But he is a senior person in support, correct? Just not on the list? You don’t have to answer; I’m just saying that there are some very good support people on here, though you seem to be right in that they are not the management contacts.

They know, we know, it is known. Support sucks everywhere all the time it is nature of the beast. They also get their fair share of flack just due to the nature of their work. They are basically the complaint department it sucks all around.

Back in my school days, I worked a Support Desk job so I know first hand how frustrating it is to be on their end of the ticket too. Often you’re stuck having to read a script or following a mandated process even though you know it’s frustrating to your customer.

Epicor support goes in cycles. It’s been much better before and it’s been this bad before. Currently we’re at the bottom end of the scale I hope the cycle begins to turn upward again once more bug fixing, knowledge and experience comes with Kinetic.

I could let this go without asking if “Support Management meetings upon request” is a real thing. And what they are (if real).

Yes it’s real, or was back 4ish years ago, when the company I was with had a major issue that needed to be resolved.

Get your CAM involved, if they don’t want to get involved request a new one (speaking from experience). Once you have a good CAM request weekly support calls with a core group from Epicor support. Ours just ended after months of weekly calls for them to fix all of our problems. With the same group engaged week over week, you will see progress on your open issues. We are now in a good place with our environment for the first time in a long time.

Thanks for the input, Scott. We just found out yesterday that we have a new CAM. Maybe this is a way to start off on the right foot with them, and keep engaged more than just when we need a new module.