I have created a BAQ Search that pulls in all quoted quotes from Jan 1, 2010 through today. I need to Print Preview all 30,900 Quote Forms and save to a file. I was thinking I could filter off the print screen with the BAQ Search, but there is no filter there, and I do not know how to add one to a print screen.

So what is the easiest way to do this? Any suggestions are appreciated.

The QuotForm doesn’t allow for batch printing. Meaning you can’t give it a list of Quotes to print. It can only print one at a time.

What you may have to do is make a BPM on UD table with one of the fields to hold the quote number of the quote to print. Use an Auto Print widget to print the quote. You’ll have to pass that field to the Print widget.

Then use DMT to update that UD table with the quotes to print.

You don’t need to add a row for each quote. Just a single row in the UD table that prints quotenum that matches UDxx.Number01

I’m heading over to Epicor Ideas real quick…they should add batch printing for quotes, like with invoices and so’s.

Why???
The ERP system will keep them for ever why print them to a PDF or a file…

Because not everyone keeps their ERP system forever?

Or maybe subpoenaed/evidence for a legal matter?

Well, for instance, to hand over to a Public Information request?

Actual crystal or SSRS report can change over time. If company uses multiple report styles, you have to know which report style to use. That being said, you can create custom form that will create reportform dataset for quote, and submittoagent for quote form, in a loop for each quote number found.

Thanks, Calvin. I’m going to give your suggestion a try right now.

Happy Friday, Calvin!
I’ve been trying to follow your suggestion, and I have a question. In another of your posts, you mention that you’d changed the Setup Auto Print > Report Parameters > PackNum field from the default “The 0 Constant” to “The specified expression…” but you said it used custom code. For the QuoteHed table, what should this field say? I’ve never set this up before, so I’m learning as I go. 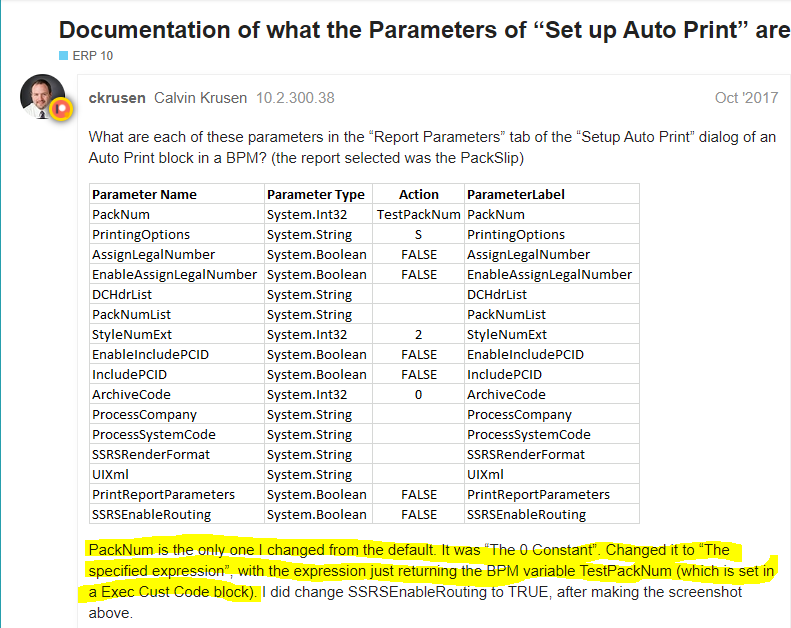 Here is mine, so far: 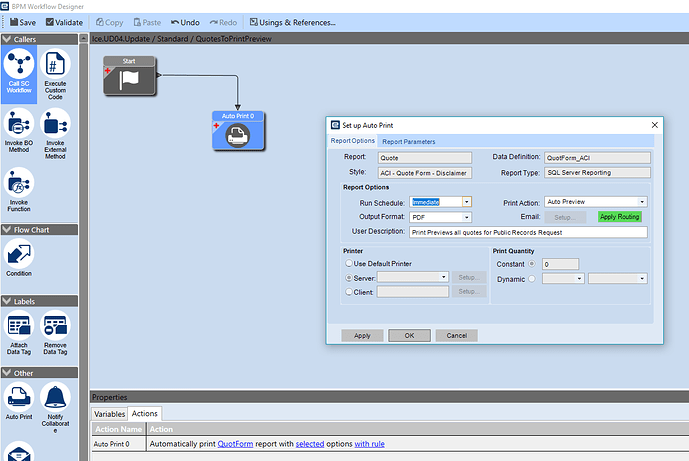 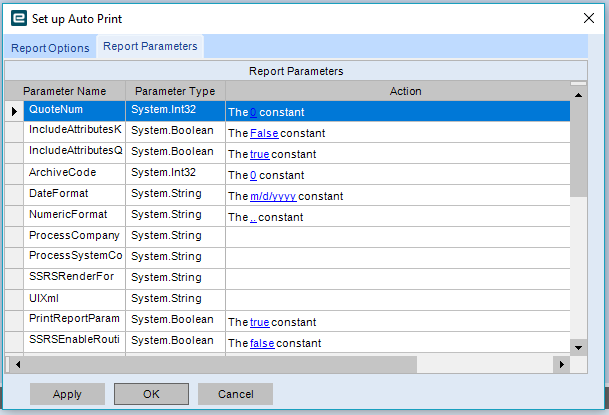 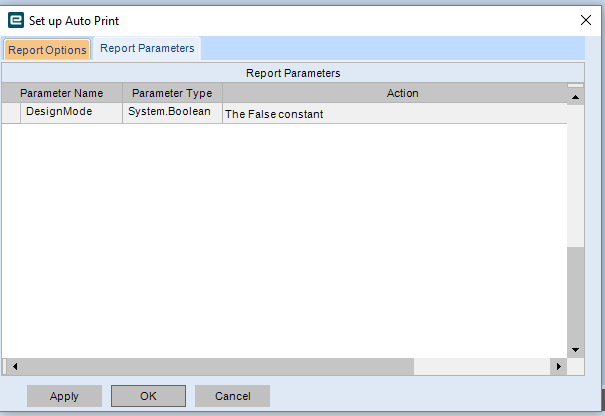 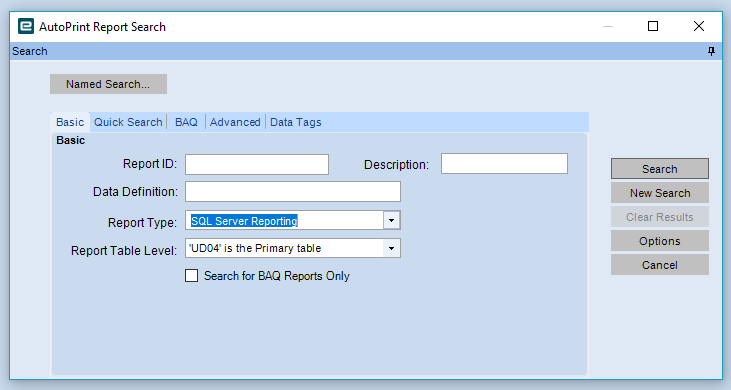 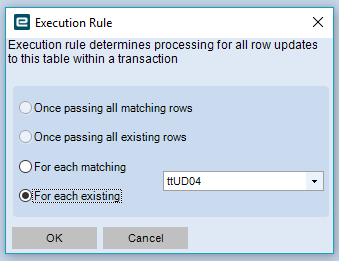 DMT is running now in Third updating UD04. My plan was to enable the BPM and see what happens once they all load. You don’t have to refresh the data model with the UDxx tables, right?

Is there anything I need to change? Am I doing this correctly at all?

I did open a case to help me, fyi, and they suggested I get back in touch with you.

What you want to be be used for the QuoteNum field is an expression using the column from your UD table that the DMT updates in order to force a new autoprint. Off the top of my head something like
UD04.Number01

Then your DMT file would be

Make sure that you use Update mode in DMT. You might need to first create that UD04 record with Key1=‘EXPORT’, in order for updates to work. If so, just make a DMT file with just the first row, and processes with the Add box checked.

Here’s how I think it would go:

What I would do is make a Break Route that emails the quote to me, setting the Attachment’s name to the QuoteNum. Like: QUOTE-<quotenum>. Make the subject line something specific to identify these emails. Make a rule or script in Outlook that automatically saves the attachment for any received email that has that special subject line.

You’ll still end up with an individual PDF for each quote, but they’d be autmatically named and saved in a specific location.

Some things I missed…

In the “Set up Auto Print” dialog, set SSRSEnableRouting to true. If you go with the break/route idea of emailing them to yourself.

No Regen is required when using UD tables - unless you add a column to it. Some folks prefer to add columns so they have meaning fulnames, instead of just relaying on Number01 meaning QuoteNum.

I’m stuck at the most important part - need to link the UD04.Number01 to the Quote Number - I’m not seeing how to do this correctly. I tried to follow your instructions, but I don’t see how to link them.
I believe my error is in the top row QuoteNum - System.Int32 - The 0 constant 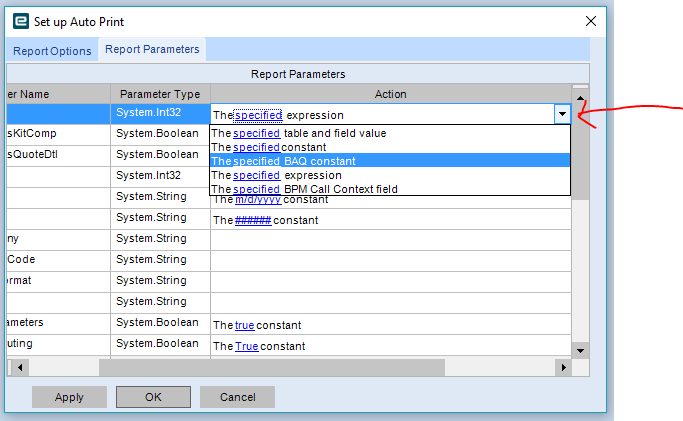 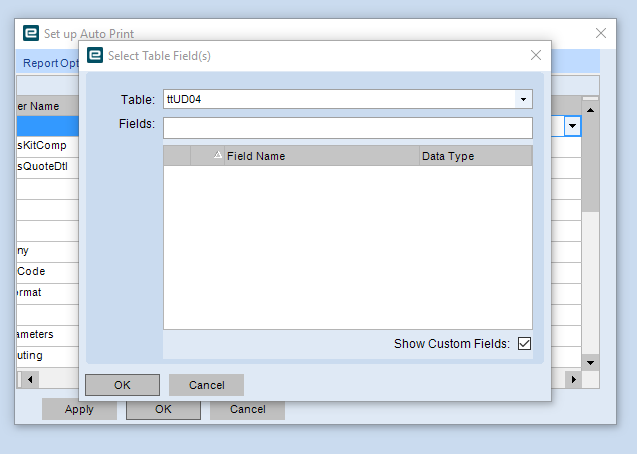 Which selection do I choose from the dropdown menu? I think I’ve got the rest correct, but this part is catching me up. And thank you in advance for any assistance, I know it’s Friday and you might just have a life. (Not me lol.)

I’m on the east coast and had already left for the day.

I think you’re real close. I don’t have access to E10 at the moment, so I can’t tell definitely what to do. But things I’d double check

Was the choice in the Execution Rule the default one? Try the ‘For Each Matching’ option and then see if that makes the table/fields dialog show the UD04 fields.

If you use the ‘expression’ option for QuoteNum, does it show any datasets or tables you can choose from? If not just try making the expression ttUD04.Number01

Okay, thanks, I will check all that out. Maybe this weekend, but I just got my first freelance project so I’m likely going to be chained to that all weekend. I’ll let you know how it goes as soon as I take another look.

I’ll be here all weekend!

Perfect, me too. I’ll pop over if I break from this other project now and then. I really want to figure that BPM out before Mon am.

Try setting that Constant 0 to an actual quote number, just to test the triggering and printing/generating aspects.

Then tackle the part of making the quote number dynamic.