You can’t import any BPM’s from the pilot into live, since its a newer version. Copy and paste doesn’t work. So you can either develop the BPM in live… Or try to recreate it after you have it working the way you want in the pilot, but this sort of invalidates the testing since you might make a mistake during the hundreds of clicks it takes to recreate it in the live.

Not a nice experience…

… yes, I tried changing the version inside the ‘.bpm’ file (which is actually a zip file) in case there were no real changes.

That sucks. You really need a development system which is the same as live, and a pilot system to test upgrades going forward. The fact that you are stuck with just 2 and the “dev” system isn’t the same version as live hamstrings you, not to mention really invalidates any testing that you do if you aren’t testing in the same version. On prem for the win I guess?

You really need a development system which is the same as live, and a pilot system to test upgrades going forward

Wait, what? DevOps you say?. This applies to both cloud and on-prem. Not every company has the big bucks to buy extra dev servers when renting smaller VMs (even free in some situations) for Dev would work.

You know where to go: Epicor Ideas - DevOps

@Evan_Purdy How about Solution Workbench? Any luck there or do you also get a version mismatch?

@Evan_Purdy How about Solution Workbench? Any luck there or do you also get a version mismatch?

Solution Workbench isn’t available on MT. And my secret contacts that will get around configurator version mismatches won’t/can’t do it for BPM’s.

We’re still “live” in our on-prem E10 database but moving to cloud and it’s confusing to our users to say, “Kinetic Prod is Pilot” when there is also a Kinetic Pilot icon on everyone’s PC. It’s amusing and annoying so I can only imagine how frustrating it’ll be when we are at two environments and mismatched versions.

When we were MT, there was an “education” DB that could they allowed us to use as the “non-refreshing pilot.” Is that not available? And I don’t have a clue what version it would be on (vNow or vNext).

It was one of those things where if you knew to ask for it by its exact name, they were like “Oh yeah of course we do that.” But you had to know it in their terms.

But I’m saying it wasn’t really “education” or demo, it was still your real data. Just older than pilot. 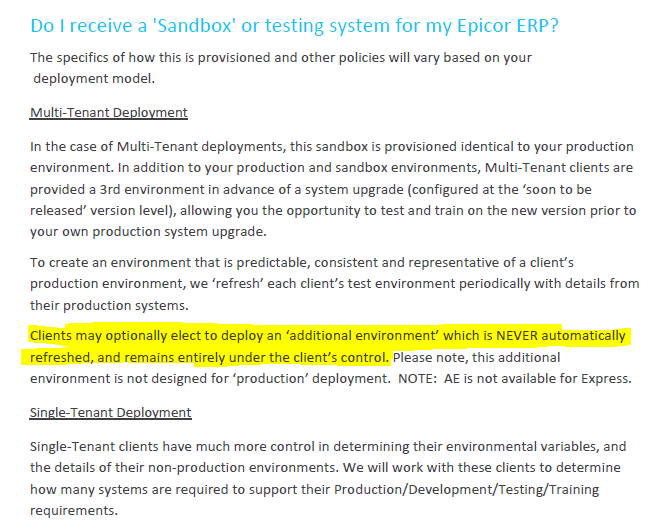 I feel your pain. Same here. I had missed the email that pilot was going to be refreshed with Prod Data before the update. I had a moderate sized customization in pilot almost done… Guess what I get to redo it… its gone…

I am not sure how this stands from a licensing perspective, but as a development environment you could stand up a machine with windows 2019 evaluation, and SQL server developer edition then install epicor on it using the education database. You would have to get a licence key from Epicor to do this.

You can pickup some pretty cheap workstations with plenty of RAM and an NVMe and your in business.

The eval editions are 180 days which should give you plenty of time.

I prefer to control my destiny lol

Oh sure, now that you’re married but I bet you were more consumption model when you were single.

Do you know if they offer that to Public Cloud peeps? We hope to switch some time this year.

We did have one in Public Cloud. I’m not sure if it comes with the Dedicated Tenancy or we got it because we had the Education seats too.

@Evan_Purdy I feel your pain. I have the same issue on Dedicated Tenant

Hannah’s asking for votes for a BPM debugger.

Frankly, she’s not asking for enough!

I’d like a test harness for directives, functions, including configurator UD Functions so we can do automated testing locally using mocking to eliminate the server altogether.

Frankly, she’s not asking for enough!

I don’t want to spook them, lol.

Yes, please search in Epicor Ideas and make your votes for those items that are important to you. Also, if you don’t see something in Ideas, then create your own idea. BPM (and BAQ and Dashboard and Function call) improvements are one of the things that I am trying to champion, but without your votes, it will not happen.

Regarding the additional systems available with our Public Cloud offerings:

Why do I think we implemented things the way we did?

This is just a general statement into the ether, and I kindly ask that no one feel that it is directed towards them specifically.

The spirit in which I am saying all of this is I truly feel that the best customer interaction I can have as part of my day job is one that is not needed at all. Speaking as the Senior worldwide Kinetic/ERP Technical Support Escalation Engineer, I would rather sit around waiting by the phone like the Maytag repairman than having a smorg of avoidable P1 issues to keep things interesting. In the interest of full disclosure, while it would be inaccurate for me to state that there weren’t a very small number of decisions/choices made over my tenure here where an alternative approach wouldn’t have more likely led to a statistically less-suboptimal end-user outcome in my mind (

), the approach we are taking with the Pilot/Production isn’t one of those.

I’m on prem with full control, a half-dozen environments, and 2 TB extra space… and I STILL don’t trust myself this much. Daily work gets exported and saved into my dev repo folder automatically synced to github…

Not having a matching Pilot/Test/Development environment available effectively eliminates the ability to try replicating reported Production issues in a safe/non-production environment matching Production.

Ultimately without at least an environment for each of the following, major compromises are being made: