I was reading the guide for out test upgrade to Kinetic, and the workstation requirements say it should be Windows 11. In short, is this required as we are still on Windows 10 with no plan on going to Win 11. 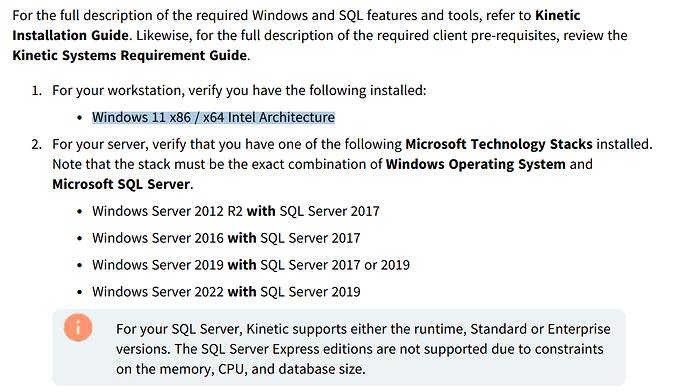 We’re testing 11.2.200.8 (AKA 2022.2.8) now on Win10 computers and have no issues. That said, doesn’t mean we just haven’t ran into something yet. Odd as Win10 is still under active support from Microsoft so weird that Epicor would require Win11.

Generally speaking the specs listed in the notes are the ‘supported’ configuration. Any deviation from that means that Support may consider you ‘unsupported’ for a given issue. That’s all the legal stuff of course.

In practice you will probably be fine, and as long as you have one Win 11 station to work on with the Support group in testing stuff, just in case, I’d say you can get by.

They (Epicor) should officially support Windows 10 while it’s supported. Especially since most will be upgrading to get rid of the fat client, but the Web interface isn’t quite there yet.

One will no longer be able to purchase Windows 10 directly from Microsoft at the end of this month. While Windows 10 is not going away, Microsoft is moving on. The cadence of technology marches on… We will be on Windows 11 this year with about 15% already upgraded.

You should be able to have multiple but never did a jump that large on a single server. The Admin Console will need to be the newer of the two.

we have the updated Admin consol. downloaded the extensions for 10.2.700 and when we try to connect pilot we get a certificate error…

This is what i am getting when trying to register the existing server.

Looks like the SSL cert isn’t installed or maybe expired. It’s been a long time since I setup a server as we’re cloud now and before that it was taken over by our infrastructure team.

yeah it was an SSL issue. we put in an Epicare ticket and they helped sort it out.